The current President (Donald Trump) is not an economic theorist, and though he sometimes uses the conservative’s economic story, he’s not necessarily all that attached to it. Seeing as the conservative economic story will likely out last Trump, I’m going to address it (as best as I understand it) instead of him. We’ll start with a statement from the campaign website of the conservative independent that ran against Trump during the 2016 election, Evan McMullin:

Americans are ready to work hard to provide for their families, but fewer and fewer are capable of finding the good jobs necessary to support a middle-class standard of living and help them to pursue their dreams. If we accept the slow growth of the Obama years this won’t change. Only if the economy begins to grow faster—at a rate of more than 3 percent year instead of less than 2—will good jobs become more widely available.

McMullin’s statement then describes his solution as lowering taxes, deregulating industries, and cutting spending. This story of how to help people economically is fairly standard conservative party thinking. The trouble is, and what I intend to show is, this is not truly conservative.

The trouble is in the assumption behind the quote. McMullin is trying to increase economic growth to 3% or faster. We’re not going to deal here with whether or not tax cuts, etc… will do that at any given moment. The trouble is the assumption of perpetual growth at 3% or better.

For the past 71 years the US has grown on average by 3.2%. This sounds great for conservative party narrative, but there are three major problems.

1. No plan for the hard times

The first one is, as anyone who’s lived long enough to experience a boom and bust cycle will tell you, 3.2% is an average and not the steady rate. As you can see in the chart below, there are regular cycles of growth and recession. 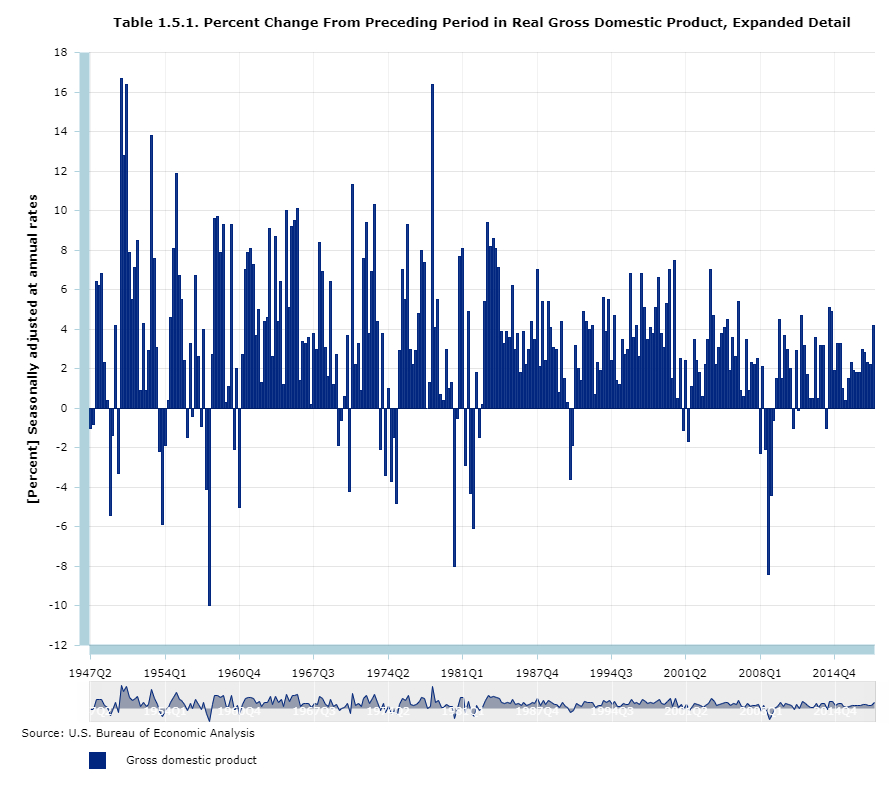 This is has been normal throughout the history of modern economies. It has been the case under Democrats and Republicans. It will continue to happen no matter how low taxes are, how loose regulation is, and how little the government spends. In fact, since one of the major purposes of regulation and government spending is to mitigate the boom/bust cycle, a general lessening of these restraints will make these cycles more volatile. This might be fine for those with enough wealth to ride out these cycles, but for the rest of us who lose jobs, savings, security, etc.. this doesn’t seem like a plan at all, much less a conservative one.

The second major problem: The time from 1947 to 2018 has been one of incredibly unusual economic growth in human history. See the chart:

Yes, it’s a chart of England, but England has a longer recorded history of this stuff. The US fits the same mold. For more you can go to Our World in Data and see charts that include the US.

The point here is: Only on graphing calculators do hockey stick charts increase in this kind of growth perpetually. If I remember my stats correctly, most of human history has had a GDP of 1% growth or less. It seems foolish (or at least not conservative) to assume that our unprecedented growth is a new normal that will last forever. There may already be indicators of a coming slowdown such as population growth slowing in the developed world, but that stuff is hard to say.

We have seen major tech companies look at charts like these recently, and we all know they eventually even out. If there isn’t a plan for the company to make money once the growth stops, they’re in trouble. The same is true here. It would seem wise (and truly conservative) to work on ways that aren’t dependent on unending growth to create the “good jobs necessary to support a middle-class standard of living” now during our humanities giant economic boom before we plateau. If we don’t, like a tech company that doesn’t have a plan beyond ‘grow’, when the growth stops a plateau could become a bust.

And three, just because the GDP is growing doesn’t mean everyone is benefiting. I’m not going to spend a lot of time here, but I want to point out: Right now the economy is growing, but wages are stagnant. Growth does not necessarily equal good paying jobs. Here’s one last chart to ponder:

We have a choice. As a representative republic we as Americans get to choose collectively how to arrange ourselves. The conservative party story suggests we make ourselves slaves to growth, but that doesn’t seem like a truly conservative (or useful) strategy for the majority of Americans in the short term, long term, or… ever. That doesn’t mean we all become Marxists, but it does mean we need to engage in figuring out sustainable and dare I say conservative solutions.

The Curse on Women is Celebrated?